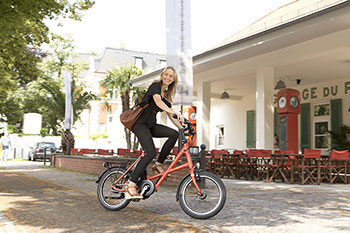 E-Bikes are trendy—not only among those who want to quickly zoom through the city, but for more casual riders as well. Many mountain bikers have also experienced the benefits of E-Bikes. According to the German Bike Association (ZIV), factors behind the increasing popularity of E-Bikes include new, visually appealing models, prominent providers, a larger target group, and above all, advanced battery and drive solutions.

Franz Morat Group’s spur gear stages consisting of a plastic gear and a rotor shaft made out of steel now ensure silent but reliable operation for drives in numerous E-Bike motors.

The success story began about three years ago when F. Morat received a request as a potential new supplier for plastic gears, which were replacing the previously used hobbed gears. Noise emission was reduced significantly and the operational behavior of the spur gear stage was improved thanks to optimizing the part geometry for plastic and the manufacturing-related increase in surface quality.

Additional optimization options could be achieved when Framo Morat was awarded the contract to manufacture the counterpart, which enabled the Franz Morat Group to consequently bring its entire process expertise and high production depth at the headquarters in Eisenbach, Germany to the project. Combining a steel rotor shaft and a plastic gear resulted in an elegant solution for reducing both weight and noise. These two essential requirements for E-Bike motors – quiet running and a long service life – are reliably, economical and sustainably fulfilled as a result of the Made in Germany quality.